As a budding or even accomplished photographer of whatever stripe/interest/genre, you put a lot into your images, and you want to make sure people looking at them know that they're yours. So you look around, and you decide that a classy watermark with a nice copyright symbol should do the trick. That'll stop those nasty image thieves, right?

Wrong. Wrong. Wrong. Now let me say that if you happen to be a wedding and portrait photographer that I feel sorry for you already. There's ample evidence over at http://stopstealingphotos.com/, at least based on the thievery and shenanigans documented on the site that there is no honour amongst wedding and portrait photographers. Or rather, there are a lot of people who end up involved in that field whose moral character is altogether questionable and no, having watermarks did not prevent the original photographer's images from being stolen. (gasp!)

If you put it online, someone will or certainly can steal your image. Your work can be downloaded by simply right-clicking and saving the image, it can be screen captured, it can be found and downloaded by examining the source. In short, if someone really, really wants your image, they can get it. Sounds bad, I know.

There is however this to think about: Systems like Flickr, Google and Tumblr are working to make it harder out-and-out to steal an image — watermark or not. But we haven't talked about the pros and cons of watermarking yet, have we?

Point one: a watermark will not prevent your images from being stolen. The thief will simply crop or photoshop it out. Theft is less of a problem if your watermark is a huge ugly thing across the middle of your image, but why would you do that? Trust me, people do, and it's completely ridiculous.

I tried a few watermarks, and there are images of mine out there with a simple copyright - name as well as a barcode/name on them. Not my most proud moments, but part of the learning experience.

Point two: watermarks can be and often are ugly and detract from the images; more to the point, unless your work is exceptional to begin with the watermark isn't helping with the aesthetics at all.

So how do you see if people are stealing / using your images? Two ways for the moment. One: TinEye (https://www.tineye.com/). An interesting reverse lookup tool for images that looks for and helps you find images that look like yours. Two: Google Image search (https://www.google.ca/imghp), also a reverse lookup for images. Both tools have browser extensions and are very useful tools. I've used them to track down users of my creative commons licenced images to see where they're being used as well as the non-licensed ones. Get to know them, you'll thank yourself later.

I don't watermark anymore. I can track down people using my images and frankly, as 'catchy' as I thought a watermark looked at first it's just not worth the effort or the nasty impact it has on the images. You can, if you've got deep pockets subscribe to Digimarc for images (https://dfi.digimarc.com/selectProduct.aspx?family=pro) and it'll cost you between 49.00/year and 99.00 depending on the number of images. This solution isn't "watermarking", it's more sophisticated than that and relies on a subscription and a Photoshop plug-in.

If you didn't want to do all that and still wanted to keep your images "safe"? Start with this as an approach:

- keep your images as low resolution as possible for online use while preserving the look/appearance you want.
- keep tight control on the sites you use to post images.
- learn to use Google Image and /or TinEye.

And if in the end you really want that "snazzy", "swank" look that watermarking gives you, (if that's how you feel about it) then go for it, after all, we all make mistakes. 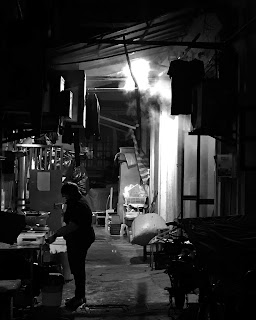